Another public figure with no expertise on AI issues sweeping, unfounded statements about it threatening humanity 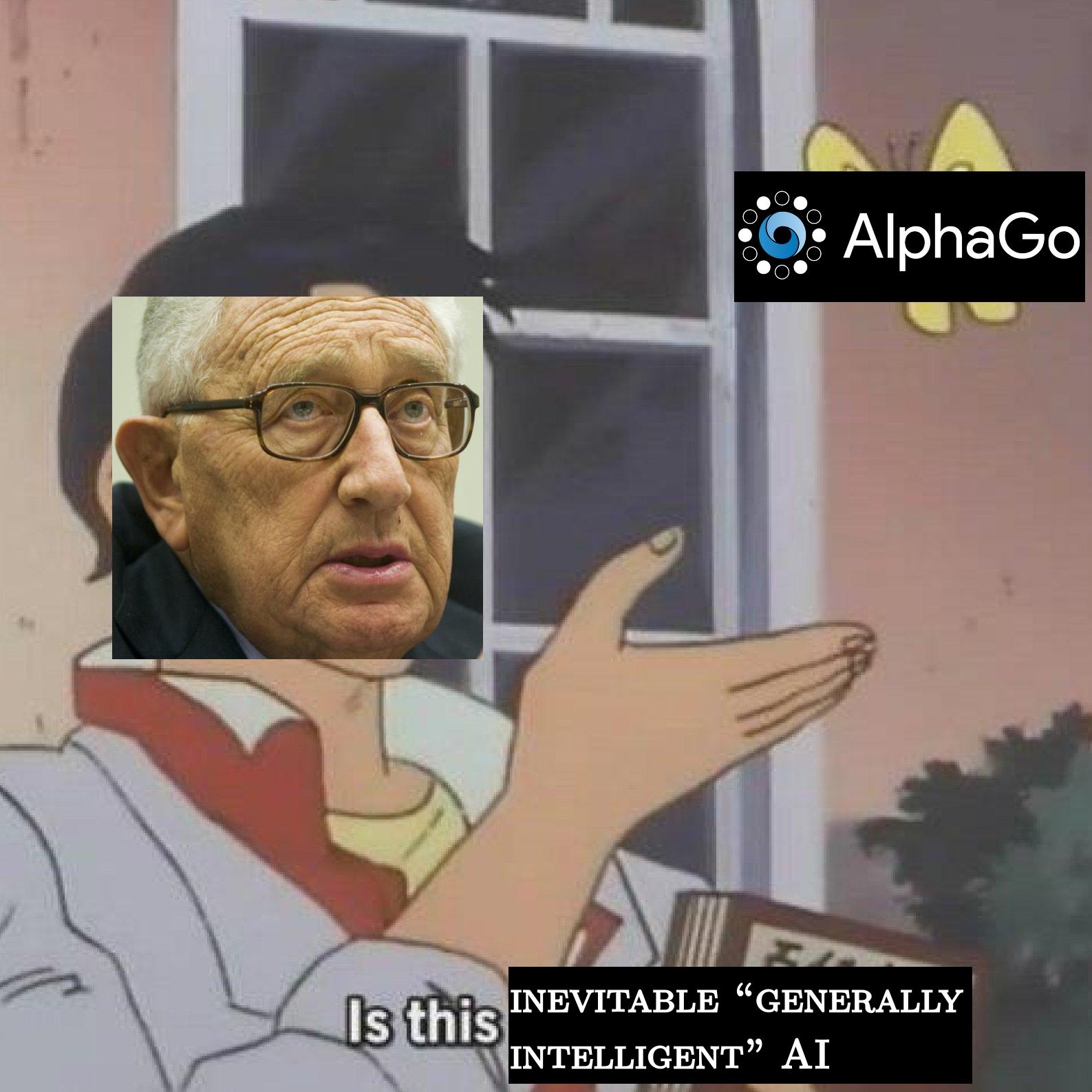 With AI having become as influential as it is today, leaders from all disciplines have been commenting about its potential impacts on society. Most recently, former Secretary of State and National Security Advisor Henry Kissinger penned an article titled “How the Enlightenment Ends” in The Atlantic. In it, he issues grave warnings about the consequences of AI and the end of Enlightenment and human reasoning.

He begins by describing his amazement at a conference speaker’s presentation about AlphaGo, an AI agent that managed to defeat the world’s best human players of the popular strategy board game Go (see our perspective on the significance of AlphaGo in these two Skynet Today articles). Hearing of AlphaGo’s success, and of how it was achieved through an algorithm that relied on self-play rather than human guidance, leads him to ponder:

“What would be the impact on history of self-learning machines—machines that acquired knowledge by processes particular to themselves, and applied that knowledge to ends for which there may be no category of human understanding? Would these machines learn to communicate with one another? How would choices be made among emerging options? Was it possible that human history might go the way of the Incas, faced with a Spanish culture incomprehensible and even awe-inspiring to them? Were we at the edge of a new phase of human history?”

He then “organized a number of informal dialogues on the subject”, which “caused [his] concerns to grow”. They led him to believe AI may cause a “sweeping technological revolution whose consequences we have failed to fully reckon with, and whose culmination may be a world relying on machines powered by data and algorithms and ungoverned by ethical or philosophical norms.”

He argues for this prediction by way of analogy to how the printing press allowed the Age of Reason to supplant the Age of Religion. He proposes that the modern counterpart of this revolutionary process is the rise of intelligent AI that will supersede human ability and put an end to the Enlightenment. Specifically, after briefly acknowledging some possible positive applications of AI, he proceeds to discuss three areas of concern regarding the trajectory of artificial intelligence research:

The recurring idea here is simple, and not new: AI cannot be kept in check. He concludes with the idea that our age has “generated a potentially dominating technology in search of a guiding philosophy” responsible for the possible “transformation of the human condition”, and urging the importance of “relating AI to humanistic traditions”. However, beyond the three vague points of concern he raises, it’s largely unclear how AI technology is going to end the Enlightenment.

Nevertheless, with far-reaching claims and heavy rhetoric, his message elicited many responses.

Media coverage of the piece was light, but a handful of media outlets and content creators on YouTube wrote articles and posted videos summarizing and adding onto Kissinger’s points.

Few pieces were written in opposition to Kissinger’s, with the exception of Timothy Carone’s Scientific American article that declares that Kissinger falls under the umbrella of

“well-known and well-meaning people making pronouncements about existential threats when, in fact, none exist and there is no proof yet that they can exist”.

On social media platforms, the bulk of the responses came from AI researchers and other notable leaders in the field, who had lots of thoughts to share about the article. Most prominent was AI expert Yann LeCun’s response to the article on Facebook. He not only criticizes Kissinger’s misleading representation of the “informal gatherings”, noting that “I participated in one of those gatherings, which was anything but informal”, but also highlighted the critical “erroneous belief” present in Kissinger’s article regarding AlphaGo:

“On its own, in just a few hours of self-play, it achieved a level of skill that took human beings 1,500 years to attain. Only the basic rules of the game were provided to AlphaZero. Neither human beings nor human-generated data were part of its process of self-learning. If AlphaZero was able to achieve this mastery so rapidly, where will AI be in five years?”

He refuted the fear-inducing fallacy Kissinger committed with succinct certainty:

LeCun also responded to a comment on his post about the “old and overblown narrative” of AI taking over the world, and how the lay public can’t help but fear the consequences because the myths aren’t properly dispelled.

“I think this “old and overblown narrative” is a consequence of two things: 1- serious scientists not venturing into speculative futuristic predictions to preserve their credibility as serious scientists (nothing wrong with that). 2- non scientists, who are used to holding the levers of power in society, trying to maintain their diminishing control over things by telling scientists that they know nothing about the “real world”. They are the ones worrying about “robots taking over” because it’s their job to “take over”. But as we all know, this desire to take over is somewhat inversely correlated with intelligence.”

LeCun was far from the only AI expert to call out Kissinger for overstepping the boundaries of his area of expertise. On Twitter, AI researcher Oren Etzioni took a clear jab at Kissinger’s statement:

People from every discipline made some comments on Kissinger’s fear-mongering article, from social neuroscientists:

Alarmingly, however, a search on Twitter for Kissinger’s message had a high proportion of international engagement, with messages sharing it in French, Spanish, and German among others. The message was indeed broadcast and shared worldwide. In fact, the First Minister of Scotland, Nicola Sturgeon, even shared the article as something to “get your intellectual juices flowing”:

And she wasn’t the only one to commend Kissinger for his writing. Defense Secretary Jim Mattis actually quoted the article in an embellished memo to our current President this May, urging him to create a national strategy for artificial intelligence:

“Mr. Mattis argued that the United States was not keeping pace with the ambitious plans of China and other countries. With a final flourish, he quoted a recent magazine article by Henry A. Kissinger, the former secretary of state, and called for a presidential commission capable of “inspiring a whole of country effort that will ensure the U.S. is a leader not just in matters of defense but in the broader ‘transformation of the human condition.’” Mr. Mattis included a copy of Mr. Kissinger’s article with his four-paragraph note.””

Other notable persons to commend include magazine editors and professors (with large follower counts):

It’s clear that, much to the exasperation of AI researchers, Kissinger sparked a lot of debate and controversy online.

AI isn’t going to overthrow humanity anytime soon. In fact, it’s still far from undertaking many complex tasks that we are building them to do. Just because AI techniques were used to to defeat humanity’s best at Go does not mean it we are even close to a “‘generally intelligent’ AI”, as Kissinger implied.

Kissinger’s article is based on the classic ‘slippery slope’ mistake that leads to the overestimation of AI technology. As usual in such cases, it is mostly based on speculation informed only by Kissinger’s own opinion and the limited education that “informal gatherings” could provide. However, despite being clearly speculative in nature, the article nevertheless fanned the flames of AI fears likely already present in many of its readers.

Not only were his claims unbacked, but they were also wrong: the central argument of the article suggests that AI techniques are evolving more rapidly than we can control (among other overreaching claims), which simply isn’t true. To see why, let’s address Kissinger’s three concerns.

In addition, Kissinger failed to recognize some nuances regarding the state of AI technology today. Here are a few key points:

Yann LeCun’s public criticism of this article is commendable. Those not in the scientific community can’t be expected to know the state of the science and how much it has advanced, and sensational news headlines don’t help with that misperception. The scientific community must be transparent and vigilant in maintaining an accurate, factual account of AI progress to keep the public well-informed. And the public should listen to the experts, not the speculators.

The bottom line: prominent leaders need to be particularly careful when issuing messages on topics that aren’t their expertise. AI is already highly misrepresented in mainstream media, and leaders should be helping to rectify, rather than exacerbate this issue.

Henry Kissinger issued an ominous message in The Atlantic regarding the consequences of rapidly advancing AI and its potential to overthrow humanity, take over the world, and nullify human knowledge. The article, with little evidence and overreaching generalizations, cites common misconceptions about the state of AI research. It therefore elicited indignant responses and backlash from the AI community, which attempted to correct his misinformed representation of AI. We urge politicians, and people with the ability to influence public perception in general, to be more cautious with their public pontificating about AI to avoid exacerbating already widespread misunderstanding about the field.