OpenAI's Not So Open DotA AI OpenAI's Not So Open DotA AI

An impressive demo by OpenAI leaves many questions unanswered 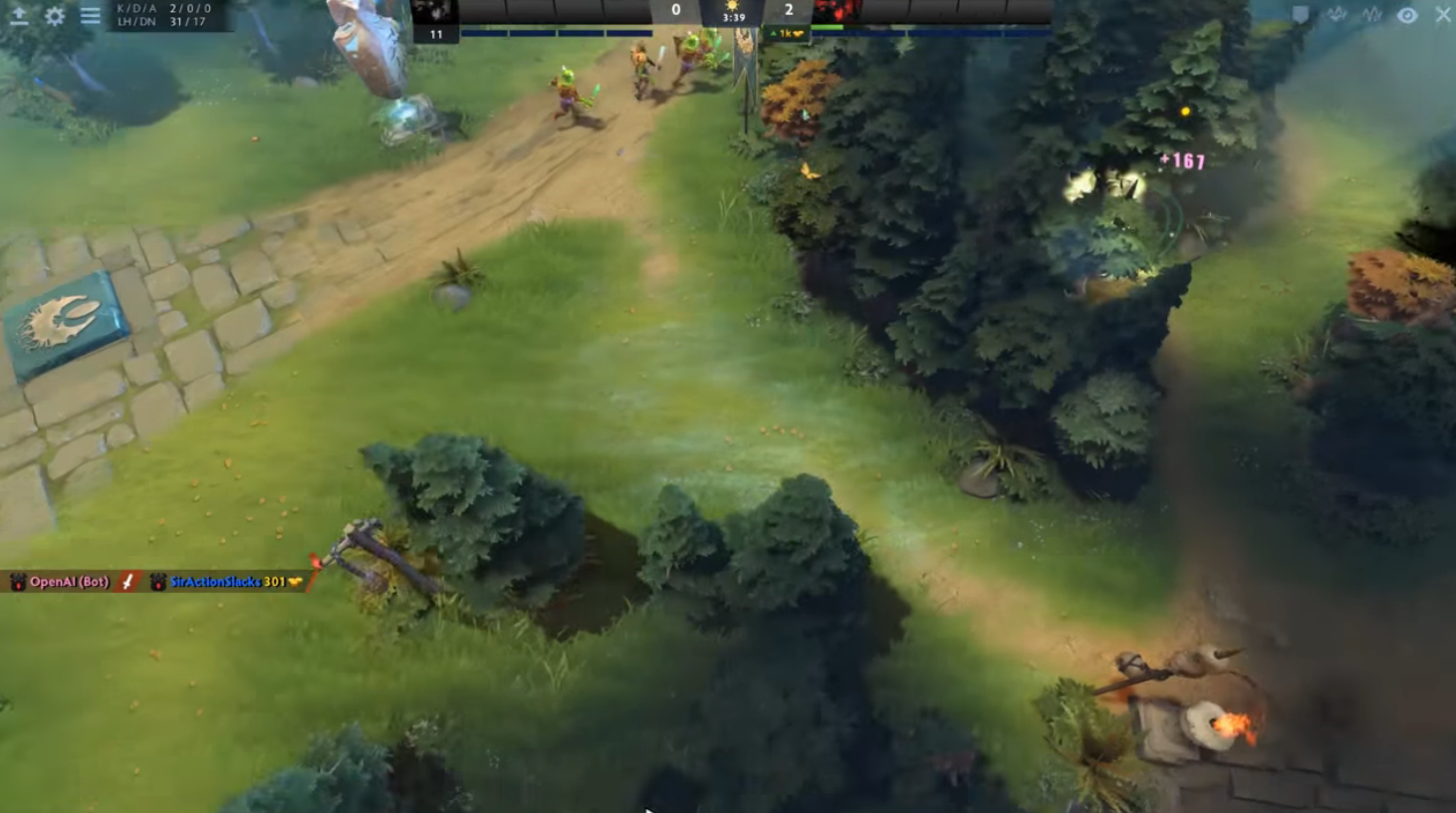 Among the biggest AI stories of 2017, and one of the most opaque in terms of actual significance.

Just months after AlphaGo’s historic triumph against the world’s best human Go player, OpenAI released an incredible video and associated press release showing that for the first time ever, a team was able to develop a self-learning bot capable of beating professionals at DotA II (an online multiplayer game).

Unfortunately, OpenAI didn’t accompany their press with an academic paper. At first, they only released a video that purported to show some of the mechanics the bot was able to learn, a short blog post summary, and an offer to apply to work at OpenAI. Highly unusual.

AI research community spent many hours investigating the extent of the achievement. OpenAI could have been, well, open about what they did.

The most the broader AI community ever got was a longer blog post. This blog post did contain some important information: a clarification that the bot was primarily trained via competetive self-play, a timeline of the model’s skill, and some discussion of the limitations of the agent (that the bot had to be explicitly taught certain necessary strategies, and that it was weak against certain uncommon tactics).

However, even this post fell short of the discussion of methodology one would normally expect from a paper. It instead focused mostly on perceived shortcomings and the (still quite interesting!) infrastructural challenges of getting DotA to run in an environment suitable for repeated self-play.

A paper with significant results in the area of real-time strategy or popular online multiplayer games would be groundbreaking. Thus far, successful self-learning agents in such games have proven elusive. The freedom that players have in games like Starcraft and DotA compared to ones like Chess and Go makes the former much more difficult to “solve” with conventional machine learning and game AI. So it is a significant letdown that OpenAI did not choose to publish their approach with the justification that “We’re not ready to talk about agent internals — the team is focused on solving 5v5 first.”

OpenAI themselves claim that the bot

has learned — entirely via self-play — to predict where other players will move, to improvise in response to unfamiliar situations, and how to influence the other player’s allied units to help it succeed.

OpenAI co-founder Elon Musk was quick to chime in

If you're not concerned about AI safety, you should be. Vastly more risk than North Korea. pic.twitter.com/2z0tiid0lc

Nobody likes being regulated, but everything (cars, planes, food, drugs, etc) that's a danger to the public is regulated. AI should be too.

And his alarming statements were soon picked up by tech media, exemplified by this frightening headline from The Verge:

Other descriptions were more varied, with The Register calling the results humiliating and scary, and TechCrunch giving a much more reserved description, simply calling the bot undefeated. Almost every article though, cited Musk’s tweets.

Hype or Not? Some Perspective on OpenAI’s DotA 2 Bot

These articles are able to bring a level of expertise and analysis that some of the earlier publications lacked, but unfortunately come somewhat delayed when compared to the more exciting headlines.

To begin, it’s difficult to understate how unusual it is that there is no paper here. The only information that has released is a press release and a follow up blog post.

Further, some of the claims made in the first press release do not appear to hold up to scrutiny. For example, one of most impressive parts of the demo, creep blocking, was not learned through self play, but was taught via some other method. The longer blog post by OpenAI also brings up another issue: 5v5 and 1v1 DotA are very different games. The OpenAI bot has trouble handling unusual situations, but as OpenAI says:

for 5v5, [unusual situations] aren’t exploits at all, and we’ll need a system which can handle totally weird and wacky situations it’s never seen.

In fact, OpenAI was not the first to encounter this same issue when dealing with 1v1 games. Earlier in 2017 some MIT researchers were able to use similar self-play methods to play Super Smash Bros Melee at a near-professional level. They too encountered similar issues with “degenerate” strategies.

This is not to say that nothing novel was accomplished. The bot did appear to learn at least one unique skill: the ability to deny information by casting a spell from just outside the enemy’s vision range.

Most impressive was re: partial observability. Much of 1v1 is observable/predictable but avoiding enemy's vision due to game mechanic is ++. pic.twitter.com/8lqmhKSEyP

Unfortunately, without a full paper it is difficult to fairly judge how impressive that is. The questionable novelty of their achievement, lack of transparency, and exaggerated PR all tarnished what was otherwise a new impressive milestone for AI.

To clarify: what OpenAI did was cool. Then Musk stepped in and made unjustified hyperbolic claims, spoiling the achievement & casting doubt.

While OpenAI undoubtedly created an impressive demo, it seems unlikely that their research, if it is ever published, will have been much more than an application of existing methods to a new game under a very specifically controlled set of circumstances. In no way does it represent a “Killer AI” or some sort of existential threat.

Josh is currently employed by Google, but these opinions are his own.